The campus, as I had expected, is a strong contrast to its surroundings. While the street seaming the campus is crowded, dusty and chaotic (for German standards, as most of the streets I saw so far), the campus is kept nicely and properly, with representative houses and lawns. The entire campus is guarded by what seems like dozens of guards and people continuously cut the lawn (or so it seems) with a manual device whose name I don’t know in English. Not to forget the many kids and women who clean the campus. 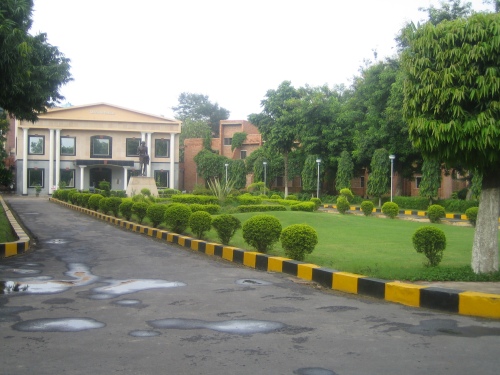 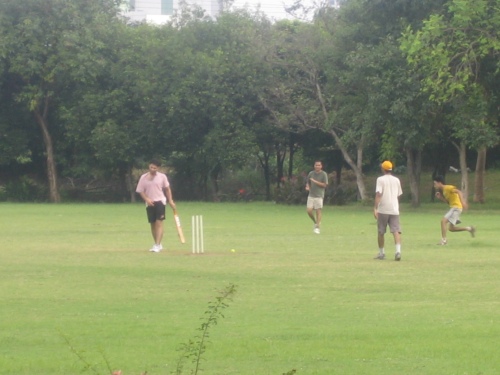 The campus consists of about a dozen buildings that house either lecture halls (with names such as “Parthenon”), hostels, canteens, professors offices, the library and the computer room. On one side of the campus, there are a couple of lawns used for Cricket, Soccer, Badminton and Tennis. Students have to return to the campus before 11, otherwise there are going to be problems. While girls are allowed to visit the boys’ wing any time, boys are not allowed to do the same vice versa. Rooms are simple, but also vary from one hostel to the other. For example, while my room has a bathroom, AC and balcony, the boys wing reminded me rather of a Jugendgefängnis 🙂

Because of the proximity of rooms and buildings and the community feeling among the classes, students interact a lot and are quite close to each other. As I understand, it is not common in India to have your own apartment until you move in with your parents-in-law. Thus I believe that the feeling of liberty on the campus is particularly strong among the Indian students. I am more spoiled – having had my own apartment for years, I don’t feel too comfortable with having a roommate (I might get one as hostels are overbooked).

The “Arcus”/”Chicken Role” hut at night

The general attitude among students is quite liberal compared to “outside India”. Jeans and T-Shirts are common (no dresses/skirts or spaghetti tops though) and the students I talked to so far so not reveal strong traditional views. Of course I do realize that I have been here only for three days and students might want to act particularly western in my presence. I don’t know if it’s good or bad, I just realize that I am dealing with an elite which is most probably not representative for the rest of the country. In any case, co-students are extremely nice. I have been welcomed very warmly and everybody is keen to help me out. I sincerely hope that the Indian exchange students will be welcomed similarly in Europe, but I am sceptical. From what I heard, some former exchange students from ESCP-EAP have demonstrated an arrogant, in some cases even colonial, behaviour which embarrasses me.

People mostly hang out at the “Nescafé”, an outdoor café with a Nescafé hut, a small canteen in the back of the campus, the “dome” (the roof of the boys’ hostel) or, at night, a small kiosk kind of hut which serves small snacks. The more diligent students go to the library, which is open till late night and is airconditioned.

Since the other exchange students will arrive only next week, I am still some kind of an attraction. There are foreigners, for example two Germans studying in another programme, but at the moment they are rather rare. So I profit from being the foreign newbie who gets all the attention 🙂

In 2008, I had been selected for the European Business School ESCP’s “Master in International Management” Programme, which was to be taught in two different countries. For my 7 month first semester, I had chosen their partner school “Management Development Institute” (MDI) in Gurgaon, a suburb of Delhi. Not having been to India before, and coming from a non-business background in humanities, it was an exciting time, which I documented on my blog.

2 Comments on On the ground. Part 2: The campus